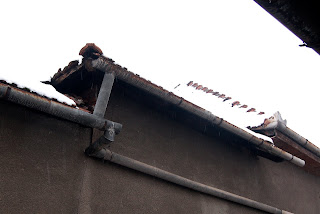 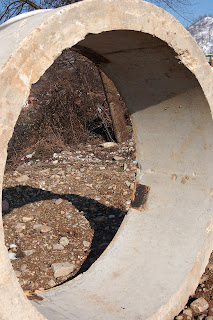 As I've walked to the studio the past few mornings things have changed. The sun has been shinning and blue skies revealed. And birds have been chirping away. I've seen few birds aside for large predatory birds and the crane, and maybe a small flock of ten or so smaller birds. But now I can hear them; chirping away each morning and being ever so diligent in their preparations for Spring.

But the word is out, another kind gentleman showed up today. I don't think he spoke a word but just held up what looked like a soap strainer, broken of course. I quickly welded it back together, trying mot to melt the thin galvanized wire rods. Two more guys showed up later but I have no idea what they were after, whatever it was I didn't have (I think they needed a cutting torch and someone to use it). So the word is out that there is some crazy American who will weld up any broken things you have laying about the house. I just hope none of my welds break, but I guess you get what you pay for… or something like that?
Posted by Transylvanian Wend at 5:48 AM